News blog of Fallenarchangel, the official Hush, Hush saga fansite
*Banner created by the fabulous Sandy with credit to Smoko-Stock for stock photos

It's been an incredibly exciting week so far - we are loving the sneak peeks of FINALE!  And it's just getting better as the chapter continues to be revealed!!  We continue today here on FallenArchangel and the final stop is tomorrow on BeccaFitzpatrick.com. 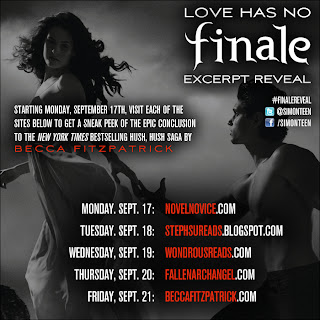 Before you read on, if you missed any of the previous 3 days you'll want to read those excerpts first. Day 1 was here on Novel Novice, Day 2 here on Steph Su Reads and Day 3 here on Wondrous Reads.


When I woke, the bed next to me was cold. I smiled at the memory of falling asleep curled in Patch’s arms, concentrating on that rather than the probability that Pepper Friberg, aka Mr. Archangel with a Dirty Secret, had sat outside my house all night, playing spy.

I thought back to a year ago, to the fall of my sophomore year. Back then, I hadn’t so much as kissed a guy. Never could I have imagined what lay in store. Patch meant more to me than I could put into words. His love and faith in me took the sting out of the hard decisions I’d been forced to make recently. Whenever doubt and regret crept into my conscience, all I had to do was think of Patch. I wasn’t sure I’d made the right choice every time, but I knew one thing for certain. I’d made the right choice in Patch. I couldn’t give him up. Ever.

“How about me and you go running?” she said. “I just got a new pair of tennis shoes, and I need to break these bad boys in.”

“Vee, I have blisters from dancing last night. And hold on. Since when do you like running?”

“It’s no secret I’m carrying around a few extra pounds,” she said. “I’m big-boned, but that’s no excuse for letting a little flab hold me back. There’s a guy out there named Scott Parnell, and if shedding some extra weight is what it’s gonna take for me to get up the courage to go after him, then that’s what I’m going to do. I want Scott to look at me the way Patch looks at you. I wasn’t serious about this diet and exercise stuff before, but I’m turning over a new leaf. Starting today, I love exercise. It’s my new BFF.”

“Soon as I lose this weight, you’ll be my number one girl again. I’ll pick you up in twenty. Don’t forget a sweatband. Your hair does scary stuff when it gets damp.”

I hung up, stretched a tank over my head, followed it up with a sweatshirt, and laced myself into tennis shoes.

Right on time, Vee picked me up. And right away, it became apparent we weren’t driving to the high school track. She steered her purple Neon across town, in the opposite direction from school, humming to herself.

“I was thinking we should run hills. Hills are good for the glutes.” She turned the Neon onto Deacon Road, and a light popped on in my head.

“That’s a real sad-hat way of looking at it, Nora. Why not think of it as motivation? Eye on the prize.”

“You’re friends with Scott. If he sees us, he’ll probably come out and talk to us. And it would be rude not to stop and give him a couple minutes of our time.”

“In other words, this isn’t about running. This is a pickup.”

Vee wagged her head. “You’re no fun at all.”

She cruised up Deacon, a winding stretch of scenic road bordered on both sides by dense evergreens. In another couple of weeks, they’d be frosted with snow.

Scott lived with his mom, Lynn Parnell, in an apartment complex that came into view around the next bend. Over the summer, Scott had moved out and gone into hiding. He’d deserted Hank Millar’s Nephilim army, and Hank had searched tirelessly for him, hoping to make an example of him. After I killed Hank, Scott had been free to move home.

A cement fence caged the property, and while I was certain privacy had been the intent, it gave the place the feel of a compound. Vee pulled into the entrance and I had a flashback to the time she had helped me snoop in Scott’s bedroom. Back when I thought he was an up-to-no-good jerk. Boy, had things changed. We parked near the tennis courts. The nets were long gone, and someone had decorated the turf with graffiti.

We got out and stretched for a couple of minutes.

Vee said, “I don’t feel safe leaving the Neon unattended for long in this neighborhood. Maybe we should do laps around the complex. That way I can keep my eye on my baby.”

“Uh-huh. It also gives Scott more opportunities to see us.”

Vee had on pink sweatpants with diva stamped across the butt in gold glitter, and a pink fleece jacket. She also had on full makeup, diamond studs in her ears, and a ruby cocktail ring, and she smelled like Pure Poison by Dior. Just your average day out running.

We picked up our feet and started a slow jog along the dirt trail circling the complex. The sun was out, and after three laps, I stripped off my sweatshirt, tying it around my waist.

Vee beelined to a weathered park bench and plunked down, sucking air.

“That had to be about five miles,” she said.

I surveyed the trail. Sure . . . give or take four miles.

“Maybe we should peek in Scott’s windows,” Vee suggested. “It’s Sunday. He might be oversleeping and need a friendly wake-up call.”

“Scott lives on the third floor. Unless you have a forty-foot ladder stashed in the trunk of the Neon, window peeping is probably out.”

“We could try something more direct. Like knocking on his door.”

Oh, Vee :-)  Hoping you are enjoying the blog tour as much as we are.  Please let us know by commenting here OR on Facebook, Twitter (use #FinaleReveal) and/or  our forum to talk about it with us and other HUSH, HUSH fans.

Don't forget to visit www.beccafitzpatrick.com tomorrow for the conclusion of the blog tour!

I am loving this blog tour and all of the sneak peaks :D I really like today's sneak peak with Vee in it. She is so funny!

My friend try's to be just like Vee. There's no secret that she images Scott in her mind. ;)

thanks for the posts. good blog.

Newer Post Older Post Home
Subscribe to: Post Comments (Atom)
FallenArchangel is the official fansite of the HUSH, HUSH Saga by Becca Fitzpatrick.
Be sure to visit us at http://www.fallenarchangel.com/ for lots of great HUSH HUSH Saga news. 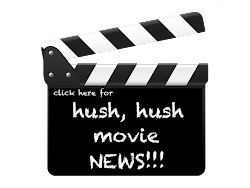 Eeek! We still can't believe it's true! Click above for movie news! 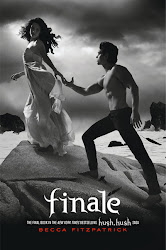